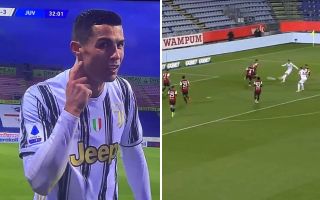 Cristiano Ronaldo is on fire. The Juventus forward has smashed the ball into the back of the net to complete a 32-minute hat-trick away at Cagliari.

Ronaldo’s first goal game from a towering header from a Juve corner. It’s one of his most deadly, and perhaps underrated attributes, with the Portugal skipper arguably being the most potent headerer of a football we’ve ever seen.

MORE: Video: Cristiano Ronaldo bounces back from midweek disappointment with powerful header for Juventus away at Cagliari

The winger-turned-striker then raced through on goal, was tripped by the Cagliari goalkeeper and earned his side a penalty. As you’d expect, he stepped up to take it, and as you’d expect, he found the back of the net. 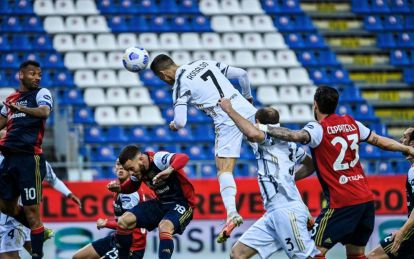 He wasn’t done there, though, this is Cristiano Ronaldo we’re talking about.

In the 32nd minute of the contest, Ronaldo squared up the Cagliari defender, shifted the ball onto his left-foot and unleashed an effort which was too powerful for the goalkeeper to keep out of his net.

That’s a first half HAT-TRICK for Cristiano Ronaldo! ?