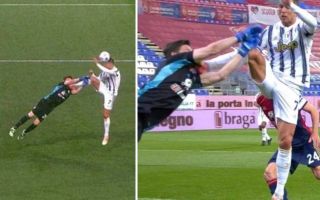 Juventus forward Cristiano Ronaldo netted a 32 minute hat-trick against Cagliari this afternoon, but should he have been sent off soon after scoring his first?

Ronaldo bounced back emphatically from the midweek disappointment of being knocked out of the Champions League by Porto. The 36-year-old scored three goals in the first-half of the contest to ensure Juventus would be picking up three more points in their desperate bid to retain the Serie A title.

He deserves all the plaudits he’s being given after what was a rampant first-half display, but to ensure that balance is maintained, we have to acknowledge the fact that he was lucky to still be on the pitch to two his second two goals on the night.

Ronaldo picked up a yellow card for appearing to strike the Cagliari goalkeeper somewhere between his outstretched arms and his face with his studs, an honest, but reckless, attempt at playing the ball. In the era of VAR, it would have been no surprise to see this upgraded to a red. What do you think?