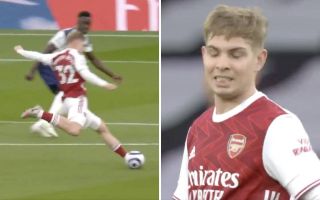 Smith Rowe has been a revelation for the Gunners so far this campaign. Having initially earned his stripes in the Europa League, the 20-year-old has forced his way into Mikel Arteta’s starting eleven – even for games of this magnitude.

MORE: Arteta drops Pierre-Emerick Aubameyang from derby for disciplinary reasons in shock news on captain ahead of Spurs clash

Smith Rowe, for all his brilliance this campaign, is still lacking a first Premier League goal. Having fired towards Hugo Lloris’ top corner early in the first-half of today’s derby, he may well have, for a second, thought he was about to wheel off in celebration.

However, the youngster saw his effort cannon off the crossbar, with a matter of inches denying him what would have been a dream goal, his first in England’s top tier, and on today of all days. Football can be a cruel game sometimes!