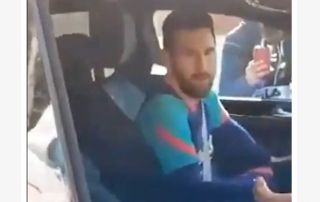 Barcelona superstar Lionel Messi has been filmed snapping at a fan for filming him in his car.

It’s not completely clear why Messi is so annoyed at this particular supporter, but it seems he’s fed up with them coming back and filming him over and over again.

MORE: Chelsea ready to go all out for transfer of Barcelona attacker

We don’t often see this side of Messi, with the Argentine generally tending to keep a low profile and avoid controversy…

Messi clearly isn’t happy with this fan, however, as you can see in the clip above.

His quotes are translated as: “Why do you keep filming the same video if you have already done this many times?

“They’ve already made a lot of videos. You can’t spend all day here. Do you think it’s normal doing the same every time? Stop.”

Is this a sign that the 33-year-old is just feeling frustrated with life right now ahead of a possible move away from the Nou Camp in the summer?