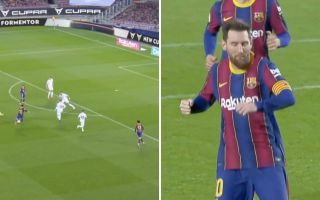 Lionel Messi capped off a classic performance against Huesca this evening with his second brilliant goal of the night.

Messi drew level with Xavi as Barcelona’s all-time record appearance maker tonight, but the game had plenty of significance for the club beyond that fact.

Barca knew that they could move to within four points of Atletico Madrid with a win tonight, with Diego Simeone’s men also no longer having games in hand over their fellow title challengers.

Messi was a man on a mission, taking matters into his own hands to ensure that the Catalan giants got the win tonight and kept their title hopes alive.

He clearly wasn’t happy with just the one stunning goal, scored early in the first-half of the game. In the 90th minute, Messi found the bottom corner with a perfectly placed strike.

They don’t come any more accurate and expertly dispatched than this, do they?

Messi scores another to mark his record-equalling 767th appearance for Barca! ?

A comprehensive 4-1 win for the Catalan side at Camp Nou ?? pic.twitter.com/E1yVPZ65K4