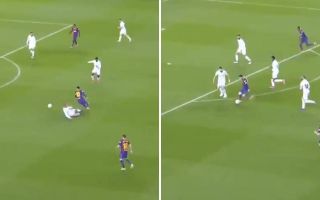 Lionel Messi, STOP IT. The Barcelona icon has scored an unbelievable goal against Huesca this evening.

With Atletico Madrid dropping points once again over the weekend, Barcelona have been presented with an avenue back into the La Liga title race – but they have to keep winning games.

Tonight’s clash with Heusca provided an excellent opportunity to get three points on the board tonight, one which Lionel Messi appears intent on taking full advantage of.

Messi, who draws level with Xavi as Barca’s all-time record appearance maker this evening, has scored one of the best goals he’s ever scored for the club in tonight’s game.

The Argentine great used his first touch to expertly direct the ball away from the Huesca defender and his second to arrow the ball into the top corner of the net, out of the goalkeeper’s reach.

A MAGICAL finish from Lionel Messi! ?

The strike bounces in off the underside of the bar for his 20th league goal of the season, and Barca have an early lead ? pic.twitter.com/H0zyw4ZeAu