Jurgen Klopp’s managed a fair few decent players in his time, and it was interesting to hear him name Robert Lewandowski as the best of the bunch.

That’s some compliment to the Bayern Munich and Poland striker, who is truly proving to be one of the finest players of his generation after a remarkable career, particularly in the last few years.

When asked to name his choice by Bild, as translated by the Liverpool Echo, he said: “Robert Lewandowski. It actually won’t be fair to say that about any other player except Lewy. What he has made out of his potential, how he pushed himself to become the player he is today, that’s extraordinary.”

MORE: Liverpool told they had a role in ‘worst transfer of all time’

Lewandowski first burst onto the scene under Klopp during their time together at Borussia Dortmund, where the German tactician also worked with some other world class stars.

Klopp himself, however, has undoubtedly enjoyed most of his success at Liverpool, so it’s a big call for him to put Lewandowski ahead of any of the likes of Mohamed Salah, Virgil van Dijk and Sadio Mane.

We thought it would be fun to put together a best Klopp XI, and we found it was, rather fittingly, an extremely attack-minded team that would probably be absolutely amazing to watch.

See below for the XI we came up with… 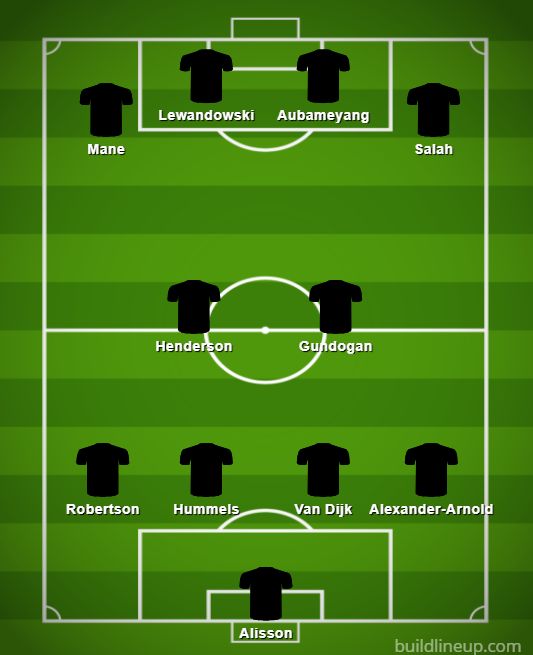 Okay, so that front four and those attack-minded full-backs might leave the defence a little exposed, but then that’s why you have the immense central defensive pairing of Van Dijk and Mats Hummels there, plus Alisson behind them in goal.

Ilkay Gundogan is another rather unsung hero from Klopp’s Dortmund days, with the Germany international going on to become a star player for Manchester City in recent times as well, taking his form to another level this season.

We’re also drooling at the idea of Lewandowski linking up with Salah and Mane, but also with Pierre-Emerick Aubameyang, now at Arsenal, who first showed his world class abilities under Klopp at Dortmund.

All in all, this just looks like a really fun team that would take Klopp’s famed Heavy Metal Football to another level.