It was a night to forget for Steven Gerrard in a season which has exceeded all expectations.

Looking for the result that would’ve seen Rangers into the last eight of the Europa League, the Scottish side fell short and, in the end, were well beaten by Slavia Prague.

Having two men sent off didn’t help their cause though even with 11 players, the visitors to Ibrox were the better side.

Gerrard admitted as much after the game when talking to the media, as reported by the Daily Mirror.

“First, I’ll deal with the football side. We were beaten by the better team over the two legs so congratulations to Slavia,” he said.

“They deserved it and in no way do I want to sit here and be a bad loser and come out with any excuses. I’m really proud of my players for the efforts and the journey they took us on.” 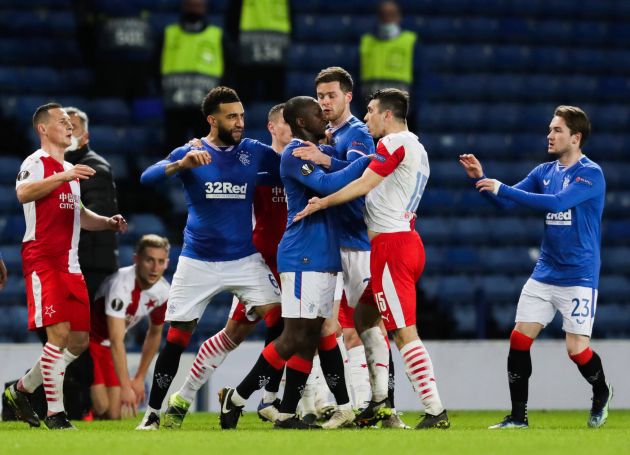 However, an incident involving his player, Glen Kamara, saw Gerrard’s blood boil, and now he wants to see UEFA pay more than lip service to kicking racism out of football after his players backed up Kamara’s account that he was racially abused by Ondrej Kudela.

“In terms of the other incident, I have to be careful what I say but you build relationships in football and I have built a very, very strong relationship with Glen Kamara,” Gerrard added, reported by the Daily Mirror.

“Glen Kamara to me is one of my own. I 100 percent believe what he is saying in terms of the accusation. Other players around him heard it.

“I will stand with Glen Kamara and deal with it however he wants to deal with it. I’m proud of all of my players tonight. They showed solidarity and from the top of this club to the bottom we stand with the players.

“It’s over to UEFA now, this situation, and I just hope it doesn’t get brushed under the carpet.”

UEFA are duty bound to act and if the accusation is proven then the harshest possible punishment must be administered in order to show clubs and players that such behaviour won’t be tolerated.