Arsenal winger Willian will face a late fitness test before a decision will be made on his availability to face West Ham tomorrow afternoon, the club have reported via their official website.

Willian is one of the most recognisable players in the Premier League, having been playing week-in, week-out in the division since joining Chelsea in the summer of 2013.

However, while the Brazilian etched his name into the Chelsea hall of fame, he hasn’t been able to produce his best performance level since signing for Arsenal last summer.

Irrespective of that, Mikel Arteta will want all of his players available for tomorrow’s game with West Ham, with Willian currently being in the best patch of form since moving to the Emirates. 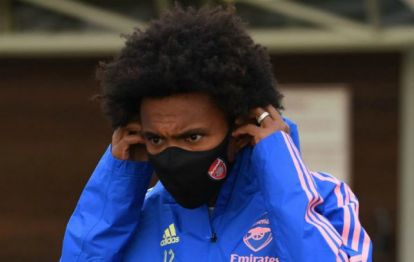 Willian hasn’t been able to produce his best performance level since joining Arsenal.

Arsenal have revealed via an official fitness update on the club’s website that Willian missed Thursday’s clash with Olympiakos after reporting tightness in his calf.

He’s partaken in training since, but he faces a late fitness test before it will be determined whether or not he will be deemed available to face the Hammers tomorrow.