Atletico Madrid are looking to make wholesale changes to the squad in the summer, with Chelsea’s N’Golo Kante being mentioned as an option.

That’s what’s reported by Todo Fichajes, who report that Lucas Torreira will be returning to Arsenal, Hector Herrera’s contract is coming to an end and Geoffrey Kondogbia has not convinced Diego Simeone.

As a result, Atleti will be in the market for midfield reinforcements when the summer comes around.

Todo Fichajes have mentioned two names in their report, both of whom are thought to be of interest to Atletico – they are Tottenham’s Giovani Lo Celso and Chelsea’s N’Golo Kante.

Kante played Atletico off the park on Wednesday night, so it’s no surprise that Simeone’s a fan, but you have to think that signing would be hugely unrealistic for them to pull off. 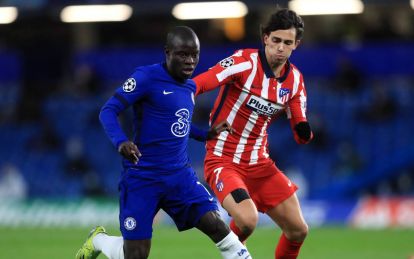 Lo Celso, on the other hand, could plausibly leave Spurs. Though, if Jose Mourinho was to depart, he could bank on the new manager favouring him more.

We’ll have to wait and see…