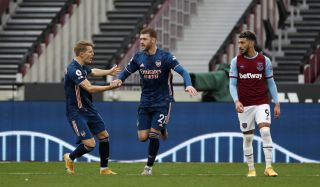 Mikel Arteta offered some more personal insight into Martin Odegaard after the Real Madrid loanee’s ‘influential’ performance in the comeback against West Ham.

Arteta was asked by journalist Simon to comment on Odegaard’s quick emergence as a ‘leader’ for the team, just six or seven weeks after arriving on a loan spell.

The Spaniard admitted that these are qualities that the 22-year-old has actually been ‘showing’ from ‘week one’ at the club.

Arteta was in awe of the fact that Odegaard ‘always wants’ the ball, as well as the fact that the playmaker ‘commands’ the team’s pressing, all factors that have made the star ‘influential’ since joining.

The Arsenal boss also admitted that he has been left ‘surprised’ by the personal side of Odegaard, with the talent ‘shy and humble’ all of the time, except when he becomes a ‘real character’ out on the pitch.

Mikel Arteta was full of praise for Real Madrid loanee Martin Odegaard after that ‘incredible’ performance to rally the ‘trembling’ team back against West Ham… pic.twitter.com/UcdzxfrQy4

Another journalist, Simon, later asked about the fact that Odegaard has emerged into a ‘leader’:

“Well he’s showing that from week one I think. The way he stepped in on that pitch, he always wants the ball, the way he commands the pressing, he’s been really influential.”

“I think we have all been surprised because he looks really shy and humble but when he steps on to that pitch he’s a real character, and he loves to play football.”

Odegaard, who has now made 12 appearances for the Gunners, picked out the pass that lead to two assists this afternoon, with the Norwegian flexing his amazing ability to keep the ball and vision.

It’s a shame that just as Arsenal have finally found an attacking player with a driven winning mentality, that man is on loan with seemingly unlikely hopes of a permanent deal, especially if he continues to impress like this.

It’s taken no time at all for Odegaard to become both a favourite of the fans and the strict Arteta, the Gunners will be hoping that he’s the key to helping the side achieve European qualification this term.