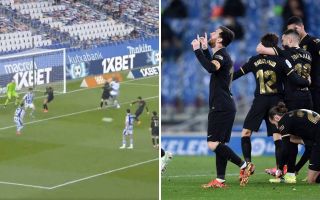 Lionel Messi scored his second goal of the night just a few minutes from the full-time whistle against Real Sociedad.

Barcelona are very much in the hunt for the La Liga title, but they needed a performance like the one they’ve produced tonight to really affirm their credentials as potential champions.

MORE: Video: Lionel Messi gets in on the act with brilliant finish as Barcelona run rampant against Real Sociedad

Real Sociedad are a good team, with Barcelona fortunate enough to catch them on a bad night, but the attacking play from Ronald Koeman’s men has been absolutely sensational from start to finish.

With Barca already having five goals on the board heading towards the 90th minute, Messi decided that he wanted he wanted to sign off for the international break with a brace.

Messi linked with Jordi Alba, who was absolutely world-class tonight, before passing the ball past the goalkeeper and piling the misery upon Real Sociedad, who are just going to have to try and take this one on the chin and move forward after the break.