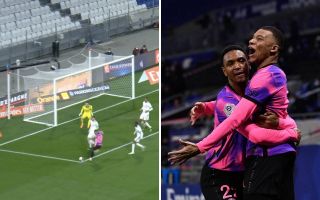 Kylian Mbappe has netted a huge goal for PSG in the title race, giving the champions the lead away at Lyon.

After Lille’s shock defeat away at Nimes earlier in the day, both Lyon and PSG knew that they could go to the top of Ligue 1 ahead of the international break with a victory tonight.

Courtesy of Kylian Mbappe, it’s PSG who have taken the first forward stride towards victory, finding the back of the net to send Mauricio Pochettino’s men top as things stand.

The ball bounced around the Lyon penalty area before finding its way to the feet of Mbappe.

The Frenchman took the ball over to his left foot, before drilling through the legs of Anthony Lopes to put PSG in the ascendency.

PSG, despite having thrashed Barcelona in the Champions League, have not shown many significant signs of progression since Pochettino took the reins from Thomas Tuchel.

Winning away at Lyon tonight and going top would be a significant one.