According to Sky Germany reporter Max Bielefeld, Bayern Munich defender David Alaba has rejected an attempt from Thomas Tuchel to convince him to join Chelsea.

Alaba is out of contract at the end of the season, which has prompted intense speculation over where he could end up next.

MORE: Liverpool and Chelsea destined for disappointment as star heading to Spain this summer

The Austrian is considered one of the best defenders in the business, with a capability to play at both centre-back and left-back.

Whatever side is fortunate enough to secure his services this summer will have a truly world-class player on their hands, but unfortunately for Chelsea, it doesn’t look as though it will be them. 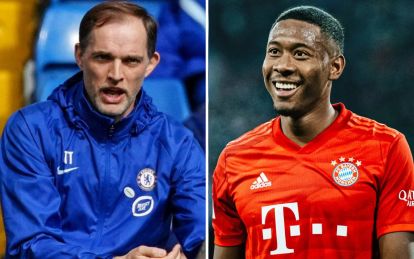 Sky Germany reporter Max Bielefeld has claimed via Twitter that Thomas Tuchel made an offer to Alaba, with the German hoping to convince him to sign for the Blues. However, his attempts were knocked back.

Update Alaba: He has decided to decline the huge offer from Paris Saint-Germain, according to Sky sources. He also said no to Thomas Tuchel and Chelsea, who tried to convince him recently. His priority remains Spain: @realmadrid or @FCBarcelona #TransferUpdate @Sky_Marc pic.twitter.com/3cxS5B21rf

Ever since this saga began, Real Madrid or Barcelona always looked as though they were the two most plausible destinations for Alaba. If this news is true, it certainly sounds as though he’s holding out for them to make their move.