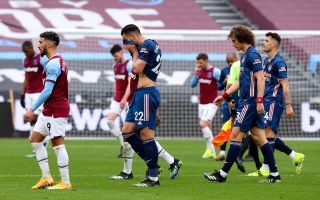 Arsenal players and staff were reportedly left a bit stunned by the strict police response when they returned from their recent Europa League tie in Athens.

The Gunners were in Greece to take on Olympiacos in the Europa League, but received visits from police afterwards as they were keen to check if players and staff were observing the correct COVID-19 protocols in place for people returning from abroad, according to The Athletic.

MORE: Arsenal ‘could have scored 7’ against West Ham

Apparently this led to some Arsenal players exchanging bemused messages on WhatsApp, but thankfully the report suggests no one was in breach of the regulations, so no fines were handed out.

Still, having police turn up at your home is always going to be a little alarming, even if measures like this are needed right now to control the ongoing coronavirus pandemic.

Arsenal, like other football teams, are tested regularly and it seems there’s been a good level of organisation to keep players in bubbles to prevent big outbreaks.

Despite cases in the UK being high over the winter, there was thankfully not too much drama in terms of Premier League games needing to be postponed, with only a few minor incidents causing a small amount of disruption, in stark contrast to this time last year when the whole competition was suspended for three months.