As team-mates together at Barcelona, they were part of Pep Guardiola’s all-conquering side, but the sacking of Ernesto Valverde appeared to drive a wedge between Lionel Messi and Eric Abidal.

The Frenchman had been the club’s sporting director during the Valverde era, but was subsequently sacked himself after Barca had lost 8-2 to Bayern Munich in the Champions League whilst under Quique Setien’s command.

He crossed swords with Messi in the aftermath of Valverde’s removal, with a suggestion that the players weren’t working hard enough prompting the Argentinian to tell Abidal to name names. 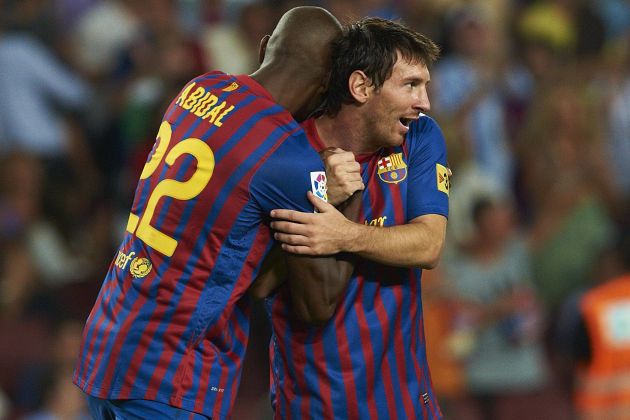 It was another unsavoury episode at a time when the club were lurching from one crisis to another, however, Abidal has since said that he still believes he was right, but didn’t explicitly say the players wanted the manager out.

“I think I was correct,” he said in The Telegraph.

“They needed to train harder in my opinion. In my time with Guardiola, it was ‘you want the best? Ok, you have to train like the best. You will win everything, only if you do the job during the week’.

“This is what I said. I never said the players wanted to get rid of the coach.

“Messi spoke to me personally as well. We had a strong conversation, but I can accept it. No problem because you have to be transparent.

“I was very comfortable because he was the only player who talked to me like this, the only one. I respect that.

“I also understand Messi is the captain and he wanted to defend the squad, but I never said that Messi told me to put the coach out. Never.

“I don’t have to fix anything with Messi, our relationship has not changed from my point of view. From his point of view, I don’t know, but, for me, the situation is over.

“We have exchanged many messages and he knows what I think. I didn’t want to turn a small situation into a global situation and put the whole club in trouble.”

Whether that particular bridge is burned beyond repair, only time will tell.