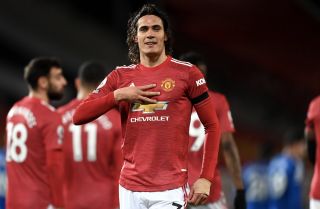 READ MORE: Former Manchester United ace defends player who gets made a “scapegoat” by fans

Despite only arriving at United during last summer’s transfer window, Cavani has seen a series of injuries and fitness issues hamper his playing time.

Perhaps down to the notoriously physical Premier League and with the striker into his mid-30s, Cavani has only managed to start nine domestic matches.

There has been recent speculation that the South American striker could make a shock exit, despite the Red Devils retaining the option to extend his deal by another year.

Cavani’s father recently came out publicly and declared there is a ‘60% chance’ his son would leave Old Trafford in the summer.

However, the latest in the ongoing saga comes from former pro Sosa, who claims to have spoken personally with United’s 34-year-old forward.

While speaking to South American outlet Polideportivo (via TNT Sports), Sosa said: “I’ve spoken with Cavani, we always send each other messages by phone. I’m closer to Cavani, who I think wants to come to Nacional [Uruguay’s Club Nacional de Football Club]

“He has more desire than Suárez. Suárez wants but the family may stop him. Cavani, his will is to come to Nacional and he’ll be welcome.”