Manchester United left-back Luke Shaw is now somewhat surprisingly ahead of Liverpool stars Trent Alexander-Arnold and Andrew Robertson for chances created by defenders in the Premier League this season.

The Red Devils ace hasn’t always been the most consistent performer for Man Utd, but he’s back to his best this season and seems to have added more of an attacking edge to his game.

MORE: Manchester United star reveals summer signing has made him change his style of play

See below for a graphic from Sky Sports, which shows Shaw is now top of the pile in terms of Premier League defenders with the most chances created this season… 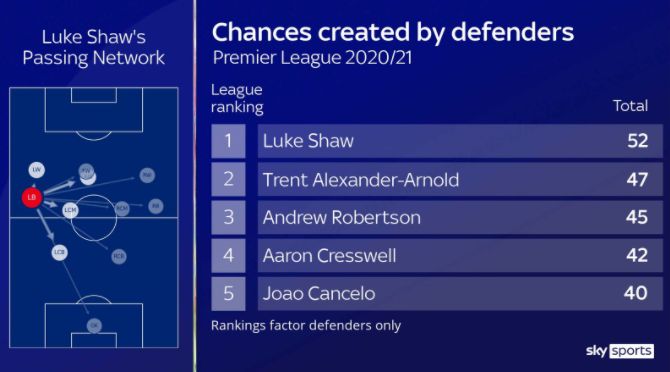 In recent years, Alexander-Arnold and Robertson have really set the standard with their superb attacking play from full-back, but Shaw is now doing a better job in that department.

United fans will be delighted to see the England international raise his game and move ahead of two of the best in the business.

This perhaps also shows why things aren’t working quite as well for Liverpool this season, with these players usually crucial to the team’s fortunes.