Liverpool could do well to seal a transfer deal for Dusan Vlahovic to replace Roberto Firmino this summer, according to Jordan Chamberlain of Empire of the Kop.

The Fiorentina youngster looks a huge talent and has also been linked with West Ham in recent times, but Chamberlain believes he could be one to watch for Liverpool in the weeks and months ahead.

Vlahovic has shown plenty of promise with 13 goals in all competitions this season, playing a similar role to Firmino as he looks to provide both a goal threat and a creative link-up from deep.

It remains to be seen if Liverpool are actually interested in the player, but it does seem like he could perfectly fit the bill for the club right now after a difficult campaign.

Jurgen Klopp surely needs to freshen things up in attack, and Vlahovic has been tipped as being the man to do it.

“Here’s a name you may not have heard much about, but I like it. Dusan Vlahovic at Fiorentina,” Chamberlain wrote on the Liverpool blog.

“The Serbian is 21-years-old and has 12 Serie A goals this term. Linked with Real Madrid and RB Leipzig, Vlahovic is a very, very skilful left-footer with power, speed and a knack of being in the right spot at the right time. 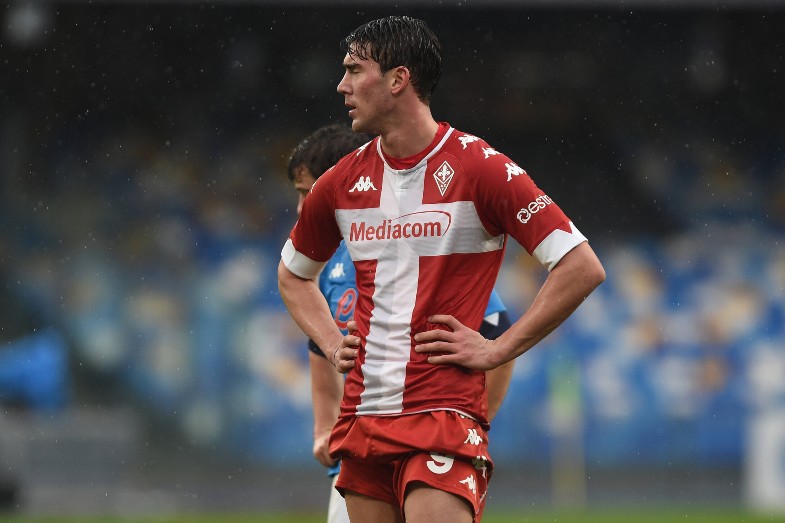 Dusan Vlahovic to Liverpool this summer?

“He can do that Harry Kane thing, too, where he drops deep and acts as the link-man for onrushing wing-forwards, which would suit Mane and Salah perfectly. He’s not yet a household name, and many Reds will be confused by my choice, but he’s a potential star.

“£35m is the figure mooted in the papers. Patson Daka is also creating headlines, but Liverpool likely won’t want another player who’ll be absent for a period during the AFCON.”