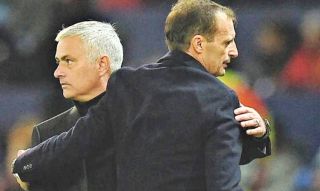 Spurs have had some cracking results this season and perhaps they could still sneak a place in the top four, but everything that was feared about Jose Mourinho’s appointment is starting to come true.

He’s become overly negative ever since West Ham came back from three goals down earlier in the season, and it’s an approach that kills the team if everything doesn’t go to plan.

He has some serious attacking talent in his side but it’s almost like he doesn’t really know how to use it, so it’s not a surprise that potential replacements are being touted in the summer.

HITC have confirmed that former Juventus boss Max Allegri is being lined up, and his history with Mourinho could make this the worst possible scenario for the current boss.

They point to an incident a few years ago where Allegri spoke about Mourinho being “pathetic” and how he used is arrogance to mask his insecurities – something that didn’t go down well with the Portuguese boss at all.

Allegri is a top-level European manager who could turn the club around and get them challenging for the Premier League again, but it will hurt Mourinho that little bit more if he does get the role.