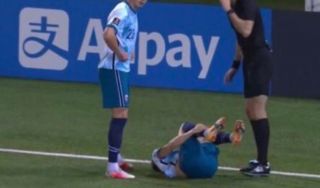 Opinions may be split when it comes to international football and how much it’s enjoyed, but there’s always a tense moment if one of your club’s best players goes down with injury.

Arsenal have found a real gem in Martin Odegaard as he’s hit the ground running after arriving from Real Madrid, while there will be a hope from the fans that he can be signed on a permanent basis this summer.

There’s a worrying moment tonight as he was playing for Norway against Gibraltar, but it looked like he went over his ankle and he was forced off during the break with the injury:

Odegaard taken off at half-time for Norway with what looks like an ankle injury. pic.twitter.com/KonUcY9w9N

It’s too early to tell if it’s just a precaution or if there’s something more serious here, so there’s going to be an uncomfortable wait for Odegaard and Arsenal.

Most of the early indications seem to suggest that he will be fine but none of them are official updates yet, so it’s worth keeping an eye on this over the next few hours.