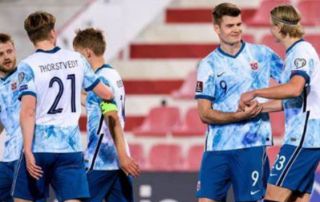 It’s always fun to see smaller teams or countries getting a chance to play against the best players in the world, but it’s even better to get their assessment afterwards.

Usually they’ll just talk them up and be thankful to escape without embarrassment, but clearly Gibraltar defender Aymen Mouelhi felt that he would face more of a challenge against Norway in their recent clash.

He was up against Erling Haaland – one of the most deadly and coveted strikers in world football, but it sounds like Mouelhi thought he would be better than he was (quotes from Globoesporte)

“I think he was one of the most dangerous (he faced). But I expected more from him yesterday. Many thought that against Gibraltar, as a small team, he would score four or five goals.”

It’s some outstanding big-time behaviour from the Gibraltar defender, especially when they still need to play against Norway again so comments like this will only rile Haaland up.

Norway still won easily but perhaps the 3-0 scoreline was a moral victory for the minnows, but we’ll see if they still have as much to say after facing Haaland for a second time.