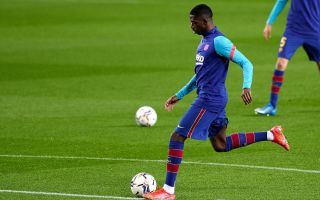 Could Ousmane Dembele actually sign for Leeds United? As unlikely as it may sound, you get the feeling the stars may be aligning.

The bizarre news broke earlier in the week, with, as the Daily Mail report, Patrick Bamford revealing that Dembele is a “massive fan of Leeds” and “watches every game”.

It’s hard to imagine how Dembele finds time to tune into Leeds while playing for one of the biggest clubs on the planet in Barcelona, but it’s a nice crossover that nobody will have expected to see.

Could Dembele take it one step further and actually sign for Leeds United from Barca? Don Balon report that he dreams of moving to Elland Road, with his contract now entering its final stages (up in 2022, as per Transfermarkt).

You would ordinarily find it difficult to imagine a player leaving a club of Barcelona’s calibre to sign for a newly-promoted Premier League side, but there’s nothing ordinary about Leeds.

With Marcelo Bielsa’s player-pull, Dembele’s affection towards the club and his contract expiring in just over a year – this one couldn’t actually happen, could it?