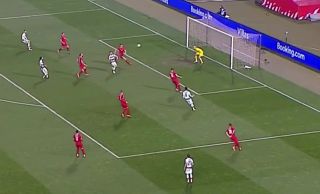 A lot of Portugal’s game plan will revolve around getting a forward isolated on the far post against a weaker defender, but it’s usually Cristiano Ronaldo who’s going to be on the end of it.

Liverpool striker Diogo Jota has already scored a lovely header tonight, and he’s just added a second as his effort clips the post on the way in:

Diogo Jota scores his second header of the night!

A win here would Portugal in firm control of the group, and it’s a long way back for Serbia now.