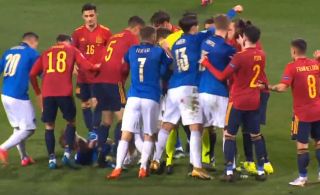 Italy’s U21 side have had their issues with red cards so far in this international break, and we were treated to three in a matter of seconds tonight as it all kicked off against Spain.

The initial award of a second yellow for the elbow looks pretty soft from the footage, but then the “brawl” kicked off as a variety of shoves and slaps were exchanged in true football style:

Barcelona’s young talent Mingueza was the only one to get a straight red for a pretty pathetic push that absolutely wasn’t worth the reaction from the Italy player, but at least it added some late entertainment in a 0-0 draw.

Video: Barcelona kid Mingueza announces himself in the Clasico with a vital goal vs Real Madrid Apr 10 2021, 21:24
FC Barcelona

Barcelona will accept €60m for star this summer with emerging youngster to take his place in the squad Mar 10 2021, 17:04
Real Madrid CF

Arsenal poised to offer €15M in exchange for Barcelona ace who has made 24 appearances this campaign Feb 27 2021, 16:47
Arsenal FC