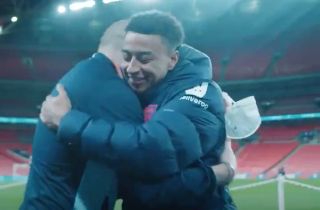 The Three Lions dispatched of the respectively far weaker opposition in a 5-0 victory, in which Lingard was bestowed with Man of the Match honours.

Lingard, who has become rejuvenated since heading to West Ham on loan – winning a spot back in the England squad, couldn’t believe the fact that he didn’t score, despite having seven shots on goal.

The 28-year-old interacted with Benedettini at full-time, engaging in a brief conversation with the stopper. Lingard exclaimed ‘I had seven shots and you saved most of them.’

It looked as though Benedettini couldn’t quite understand the words in full but he soon got the gist of the respect Lingard was trying to show, with the pair embracing soon after.

It’s nice to see a solid performance like this from a low-profile player like Benedettini, who doesn’t even start for Italian third-tier side Cesena.