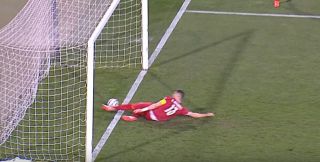 A lot of us may have presumed that goal-line technology was now in place at most levels of senior football, but the situation between Portugal and Serbia tonight showed how much it’s missed when it’s not there.

Cristiano Ronaldo thought he had scored a last-gasp winner tonight as his effort was over the line (It wasn’t miles over, but it was a goal), but the officials didn’t give the goal and chaos ensued as Ronaldo completely lost it.

He chased down a linesman and even threw his captain’s armband away in disgust at one point, but he’s since taken to Instagram to explain his feelings after the game:

He’s essentially saying that he’s proud to captain the country and he’ll continue to give everything, but he just struggled to deal with that situation but he’s vowing that the team will bounce back.

A report from JN has also quoted claims from the Portugal boss Fernando Santos which states the ref has since reviewed the footage and apologised although that’s no real consolation.

It’s one of these situations where it’s a tight call and you can’t really blame the linesman for not awarding it if he’s not sure and feels like he’s guessing, but expect to see a clamour for goal line technology and possibly VAR for the qualifiers after this.