Inter Milan have identified a potential replacement for Romelu Lukaku, who is being mentioned as a potential transfer target for Chelsea.

Lukaku, who first arrived into Premier League football with the Blues, has been linked with a return to Stamford Bridge.

MORE: “No brainer” and “not sure” – Surprise Chelsea transfer news has these fans divided

The speculation was first intensified by journalist Matt Law, who wrote the below in a column for the Telegraph.

BILD reporter Christian Falk then sent out the below tweet, confirming, at least as far as he knows, that the Belgian was a possible alternative to Erling Haaland for Thomas Tuchel.

Lukaku has established himself as one of the best strikers in the business during his time at Inter Milan, leaving both Chelsea and Manchester United with egg on their face.

Selling Lukaku is a mistake that Chelsea are reportedly prepared to rectify, though, and if Don Balon are to be believed, Inter are already preparing for the possibility of his exit.

Don Balon report that Atalanta’s Luis Muriel is being considered by Serie A leaders Inter as a potential replacement for Lukaku, were he to depart this coming summer. 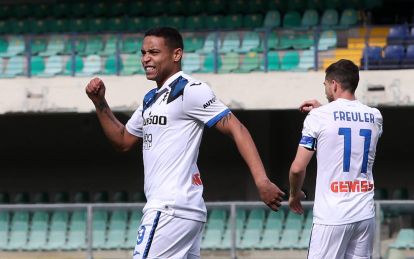 Luis Muriel has scored 20 goals in 37 appearances this campaign.

This may well be merely a contingency plan for Inter, but they’ll be well aware of the financial firepower that Thomas Tuchel will have at his disposal this summer.

If Chelsea dangle the carrot, so to speak, Inter may well be tempted to cash-in.