Paris Saint-Germain and Manchester United are both waiting in the wings with Sergio Ramos now just three months away from becoming a free agent.

That’s what’s reported by Todo Fichajes, who write that there has been no agreement between Ramos and Real Madrid over the extension of his contract, which at this point, so close to the deal’s expiration date, leaves serious question marks surrounding his future at the Santiago Bernabeu.

MORE: Cristiano Ronaldo’s agent to meet with Juventus as he dreams of transfer back to his former club

Ramos, whether he stays or goes, will be remembered as a Real Madrid legend, but his close ties with the club and president Florentino Perez do not appear to have played any sort of role in ensuring his continuation as a Los Blancos player.

As a result, PSG and Man United, who are both interested in Ramos, according to Todo Fichajes, will have been given encouragement. The report notes that it’s the French giants who are more seriously interested in the Spaniard, but United are in the running nonetheless. 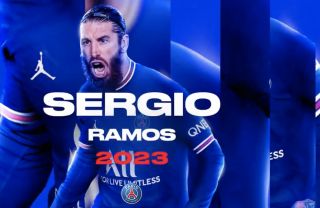