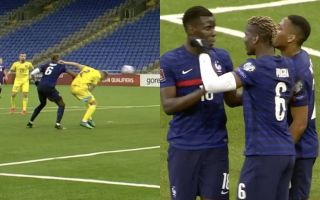 Manchester United midfielder Paul Pogba received the plaudits for France’s second goal against Kazakhstan after forcing Serhiy Malyi into an own goal.

Pogba has been missing for Man United in recent weeks through injury, but has recovered in time to feature for France over the international break.

Didier Deschamps will be glad for it, too, with the polarising Red Devils midfield man having played his part in the scoring of Les Bleus’ second goal of the day.

Kazakhstan’s Serhiy Malyi made a quite extraordinary block to deny Anthony Martial heading home into an open goal, but in doing so, he conceded a corner.

From the resulting corner kick, Malyi found himself tussling with Pogba in the penalty area, with the United man’s strength clearly a distraction for Malyi, who had his positioning all wrong.

The ball hit his head and beat the goalkeeper, with Pogba getting the congratulations for his teammates for the role that he played in forcing the mistake from Malyi.