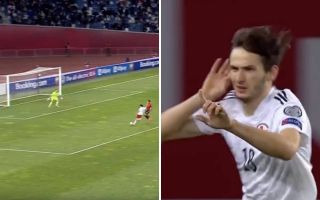 Georgia are beating Spain. This is not a drill. GEORGIA ARE BEATING SPAIN!

Heading into today’s World Cup qualifying clash, the instructions from the Georgia coaching team must have been to keep the score down, such is the vast amount of attacking talent that Spain have in their squad.

However, with the minnows having successfully frustrated Luis Enrique’s men for the first-half of the contest, they did the impossible and struck on the stroke of half-time to see them head into the break in front.

It was Rubin Kazan’s Khvicha Kvaratskhelia who provided the finish past Unai Simon, with the Spanish defence, and Manchester City’s Pedro Porro in particular, not exactly covering themselves in glory.

Kvaratskhelia found himself with far too much space on the left-hand-side of attack, and despite Porro’s best efforts to sprint back into position and block the shot, the 20-year-old winger found the bottom corner.

We could have a HUGE upset on our hands here.

Khvicha Kvaratskhelia with the only goal so far #georgia #spain