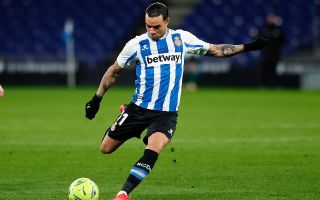 Leicester City and West Ham United are reportedly set to battle for the transfer of Espanyol striker Raul de Tomas this summer.

The 26-year-old has had a fine season in Spain’s second division, scoring 16 goals in 29 league matches so far, and it seems he’s now attracting admiring glances from the Premier League.

De Tomas looks too good to be playing at this low level after Espanyol’s relegation last season, so it’s not surprising he might not stick around much longer.

Both Leicester and West Ham could do with more options in attack next season, with David Moyes’ side particularly short of an out-and-out goal-scorer up front.

Leicester, meanwhile, could do well to start thinking about replacing the ageing Jamie Vardy at the King Power Stadium.

De Tomas looks an ideal option with his goal threat and work rate up front.

Leeds United have also been mentioned as potential suitors for the Spaniard this summer.