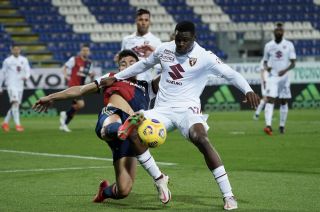 According to reports, Liverpool have put the wheels in motion to sign Torino full-back Wilfried Singo.

READ MORE: Video: ‘A powerful statement’ – Jermain Defoe lifts the lid on what Steven Gerrard said to get the striker to sign for Rangers

Singo, 20, joined Torino’s youth academy in 2019 after making the switch from Ivory Coast side AS Denguele d’Odienne.

Since making his first-team debut in August 2019, the highly-rated Ivorian has featured in 30 matches and directly contributed to five goals, in all competitions.

Despite making his debut nearly two years ago, it has been in the current season which has seen the 20-year-old really nail down a place in Davide Nicola’s plans.

In what has been an impressive individual campaign, Singo’s recent form has seen him draw links to Premier League champions, Liverpool.

According to a recent report from Tuttosport, Jurgen Klopp is a big admirer of the attacking full-back and believes he could provide necessary cover for current star Trent Alexander-Arnold.

The Italian outlet claim the Reds have already launched a £17m bid for the young Ivorian but may need to increase their opening offer to £21m, if they’re to stand any chance of Torino accepting.

It has also been claimed that Klopp is keen to reach an agreement as soon as possible as interest in the young defender, notably from AC Milan, continues to grow.