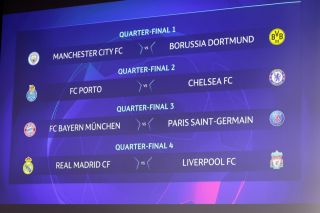 The first-leg of Porto vs Chelsea is likely to be played on neutral ground, according to Sky Sport journalist Angelo Mangiante.

While football has, as you’d have expected, been impacted by the ongoing coronavirus pandemic, the Champions League spectacle has been as entertaining as ever.

Porto progressed to the quarter-final stage of the competition by springing a shock victory on Juventus over two legs, while Chelsea breezed past La Liga leaders Atletico Madrid.

The contest between the two heavyweights in their respective countries looks certain to be a cracker, but if Angelo Mangiante is to be believed, it will not be taking place in its traditional form.

#Porto vs #Chelsea will be played on neutral ground. Not yet official but very likely.
For the moment Seville has offered to host it. #ChampionsLeague #CFC

It remains unclear from that tweet whether it’s the first-leg or both which will face the effects of pandemic related rescheduling, but it seems pretty safe to say we won’t be having one leg in Portugal and one leg in England, as would be the ordinary way of doing it.

Whatever the format, Thomas Tuchel’s men must fancy their changes of progressing to the Champions League semi-finals, for what would be the first time since 2014 under Jose Mourinho.