Chelsea’s official Twitter account has been hit with a backlash after posting an N’Golo Kante meme which some users found distasteful – and even racist.

The international break must be a difficult period for football club’s social media admins to earn their wage, so you could forgive whoever’s in charge of running the Chelsea account for trying to be creative and humorous.

In this case, they created a meme in wake of the huge container ship, the MV Ever Given, finally being freed after being stuck in the Suez Canal in Egypt since last Tuesday. 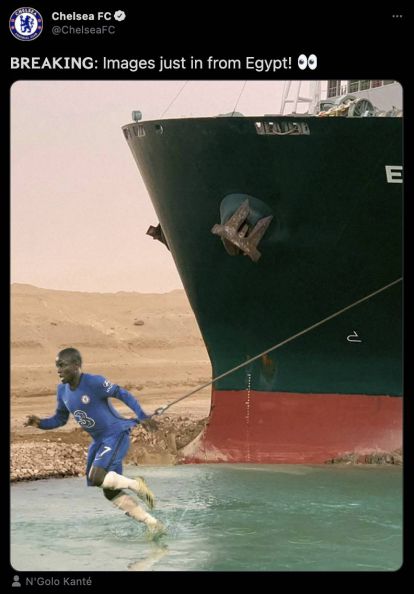 Memes of this nature including Kante are commonplace in the football social media community, but something about this post from the official Chelsea page has not sat well with some fans on Twitter.

Here’s some of the replies to the original Chelsea tweet which included the graphic. With there being offence caused to some, it might be one of those they’ll be forced to delete before long…

Don’t know why but this feels kinda racist

this absolutely ain’t it chief

This is lowkey racist

something is not right pic.twitter.com/2zYpSaoDpZ