According to Sport Witness, Everton attacker Richarlison has hit out at Liverpool star Thiago Alcantara for his reaction to the clash between the pair in the Merseyside derby that saw the maestro injured.

Richarlison commented on the brewing feud to journalist Thiago Asmar in a video posted to YouTube, which also involved Arsenal star David Luiz and, Ajax ace David Neres and the retired Julio Cesar.

The Everton man was shown a straight red card in the final minutes of the 2-2 draw between the sides earlier this season, which eventually left his Reds counterpart and compatriot injured.

Richarlison discussed the apology he made on Instagram after the match, which differed from the savage and disrespectful jokes two of his teammates made, but the message was not reciprocated.

The Toffees striker then shared that since Thiago did not wish to ‘reply’ to the message that it was to be ‘deleted’. The pair then faced off in the Merseyside sides’ second league meeting in February.

Richarlison, who features for Brazil whilst compatriot Thiago elected to represent Spain internationally, admitted that the midfielder didn’t ‘look’ at his ‘face’ once during the clash at Anfield. 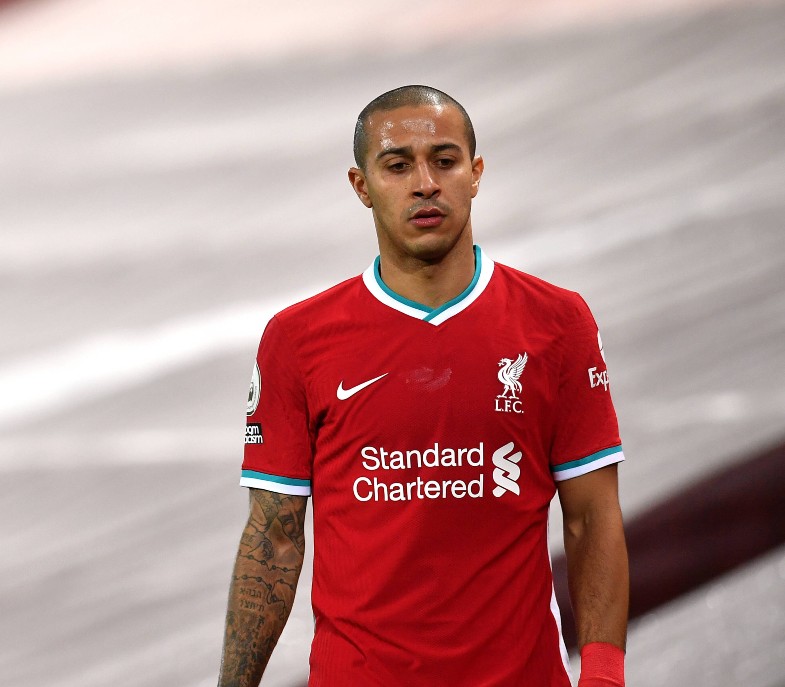 Thiago Alcantara was sidelined for two-and-a-half months after the Richarlison challenge.

Here is what Richarlison had to say on the feud with Thiago:

“The last game I made that challenge on Thiago and got sent off. My goodness. Then I went on Instagram to apologise and such. He only saw it.”

“I said ‘I’m going to delete this message too, since he doesn’t want to reply’. ”

“Then I went there and deleted it. He didn’t answer, no. Then there was the derby now, at their home, he didn’t look at my face, I didn’t look at him, either. The game goes on. He ignored the pigeon.”

Richarlison played down talk of the ‘fight’ with Virgil van Dijk that came last season:

“What fight? It was at the time of the game that we argued.”

“There was a little fight there, which we … here it’s a classic match. It’s the Liverpool derby. We wanted to win, they wanted it too.”

“So we ended up in a little fight there. Just like in every game, I have with one of their players.”

Richarlison didn’t look at the former Barcelona star in turn, before bizarrely adding that Thiago had thereby ‘ignored the pigeon’ – not the kind of animal you’d expect someone to liken themselves to.

The gist of the comments seem to be that Richarlison is hinting that Thiago was dishonourable and possibly even scared to face up to him in the aftermath, which is quite the way to twist the moment.

Here lies a man that is angered by the reaction of a fellow professional that he left sidelined for two-and-a-half-months with a reckless challenge, though perhaps it wouldn’t have been so long if Thiago was substituted at the time of the incident by Jurgen Klopp.

Richarlison scored the opener as the Toffees beat their local rivals 2-0 in the February fixture, marking a first win for Everton at Anfield since 1999.

The Everton striker is certainly quite the character.