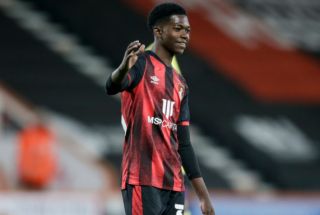 It’s never a good idea to over-hype a talented youngster, but if they are playing in the Championship when they are only 16 then you know they must be pretty special.

Bournemouth wonderkid Ajan Burchall has already made his first team debut this season and he’s featured in the matchday squad more than once, but a report from Football Insider has suggested that his departure is inevitable this summer.

His current deal runs out in the summer and he’s rejected scholarship terms on a new contract, so it means he’s free to leave although there will be some kind of tribunal to determine the fee.

READ MORE: Arsenal have fallen into the Mesut Ozil trap again as over £500k per week is spent on two underperforming veterans

Several Premier League sides are credited with an interest, but Arsenal are the biggest name in there and it’s believed that they’ve been trailing him for a while now.

Aston Villa and West Ham are also linked so he will have several options, so it may come down to which team can convince him that they can develop him into first team star.

He’s a pacey winger who can play on either side so he certainly sounds like an exciting prospect, but this will be a blow to the Cherries as they lose such an exciting talent before they can really see how good he is.