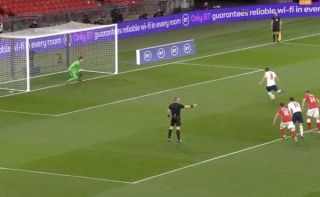 Tottenham Hotspur and England sensation Harry Kane has once again given his side the lead – this time against Poland in England’s latest international fixtures.

Currently competing in Europe’s World Cup qualifiers, Kane has successfully converted from the spot after team-mate Raheem Sterling was bought down inside the area.

After opening the game’s scoring after just 20-minutes, the Three Lions remain odds-on-favourites to qualify for next year’s World Cup in Qatar.

Kane’s latest goal sees him extend his goalscoring record for England to 34 in just 52 caps, in all competitions.