So it’s goodbye to Sergio Aguero – without a doubt one of the greatest strikers to grace the Premier League.

The Argentine hot-shot will be leaving Manchester City this summer and will be difficult to replace after a stunning 257 goals in 384 games for the club.

That includes 181 goals in the Premier League, putting Aguero fourth in the all-time list, and still with time to possibly overtake Andrew Cole in third if he can end the season strongly.

This prompted us to debate the best ever Premier League strikers, and, remarkably, none of our writers chose Aguero.

Read on to find out who the CaughtOffside team went for…

There are so many great options to choose from, but in my opinion there is still one very obvious winner and that’s Thierry Henry.

The former Arsenal man may only be 6th in the all-time list of Premier League top scorers with 175 goals, behind a midfielder in Frank Lampard, as well as the vastly underrated Andrew Cole, while Sergio Aguero recently overtook him as the highest scoring overseas player in the English top flight.

Still, going by goals-to-game ratio, Henry moves up to joint-first with Harry Kane. 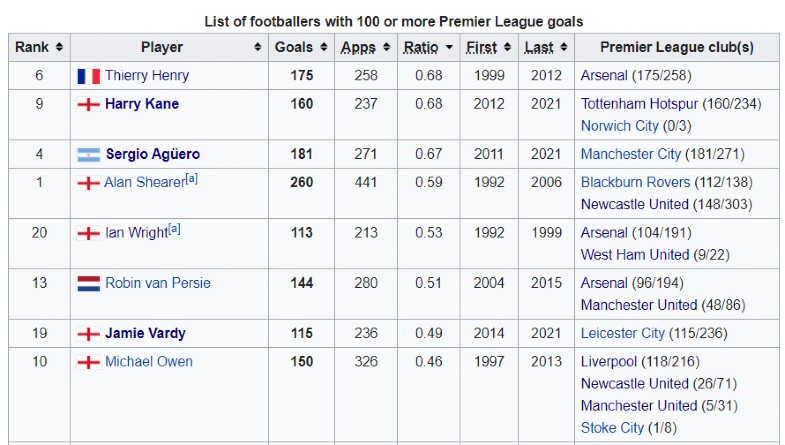 Of course, it’s not just about goals – Henry was also one of the best creative players the Premier League has seen; in 2002/03, as well as scoring 24 league goals, he provided 20 assists for his team-mates.

Away from just stats, Henry was also a great entertainer, bringing Ronaldinho-esque flair to the Premier League, and scoring some of the most memorable goals we’ve seen in this country. Aguero may now have the better numbers, but he’ll never have a highlights reel quite like Henry.

The Frenchman is surely one of the most complete forwards of the modern era and we’ll probably never see anything like him in the Premier League again.

Burst onto the scene at 16 years old. Won everything domestically, multiple times. England and Manchester United’s top goalscorer speaks for itself.
Similarly to Harry Kane, Rooney could do it all – he could play as a two, as part of a front three or as a lone striker. If needed, he could hang off the last man or hold up the play. Strong in the air and deceptively quick. No glaringly obvious weaknesses in his game. Oh and then there’s a certain overhead kick.

Whilst the news of Sergio Aguero’s upcoming exit from Manchester City has sparked calls for the Argentine to be labelled the Premier League’s best striker ever, that honour should remain with Alan Shearer.

Shearer’s standing as the division’s all-time top scorer makes that tag undeniable, the ex-England international was just so complete.

Shearer went out and scored all types of goals, all whilst never playing in the kind of bonafide star-studded team we see today. Despite being the opposition’s distinct focus, he still banged them in.

Aguero certainly makes my top three though, alongside Arsenal legend Thierry Henry. The Independiente graduate is an absolute killer in front of goal, he’s an out and out striker with a clinical skillset.

The way Aguero would pip defenders to the ball with perfectly executed and sharp runs may never be matched.

Aguero also boasts a phenomenal record against top six opposition, which is something that today’s elite PL strikers can lack at times.

Drogba arrived at Chelsea when they were still growing into the powerhouse that we know today, and it’s fair to suggest that he played a massive part in their rise under Jose Mourinho.

There was a belief that he wasn’t living up to expectations in his first couple of seasons but he still scored 16 goals in both campaigns, before he burst into life with 33 goals in his third year and he was fully established as one of the best strikers in the world.

It’s also worth remembering that he’s had to come back from his fair share of injuries over the years, but he came up with huge moments when it really mattered, and he found redemption for his UCL final red card against Man United when he dragged them to penalties against Bayern with a brilliant headed goal.

Drogba will be remembered as one of the players who made it fashionable to play with one up front again – purely because he was so good at every aspect of his game that he could still occupy an entire defence and that also allowed Chelsea to dominate the midfield.

His return in 2014 does damage his case but that was clearly a nostalgia transfer, and when he was on his game and fit there was nobody who could strike fear into an opposing defence like Drogba could.

With the EPL coming up to its 30th anniversary, trying to pin down the best striker to have played in the English top-flight is a difficult one. After all, there are a number of worthy candidates.

Though it won’t be a popular choice, I’m going to plump for Jamie Vardy for the simple reason that he’s played way above the level that may have been expected of him if we go back a decade.

His transition from non-league marksman to Premier League predator is the stuff of dreams. He has been as important for Leicester as Shearer was for Newcastle, Henry was for Arsenal or Owen and Fowler were for Liverpool.

There are plenty of others that perhaps deserve a place on the list, but none of them have a back story like Vardy’s and, even now, he continues to deliver.

In Leicester’s glorious season, he was the main man, and a Premier League title elevates him, in my opinion, above the likes of Kane and Shearer.

For me, the best striker ever to grace the Premier League is Didier Drogba.

That won’t be a popular choice, with the bulk of football fans likely to consider longevity as paramount, but I have never seen a striker in Premier League history have a better season than Drogba did in 09/10 under Carlo Ancelotti.

‘Unplayable’ is a term used frequently to describe combative centre-forwards, but Drogba provides the benchmark in that category of strikers. He was absolutely unstoppable on his day – just ask Arsenal fans.