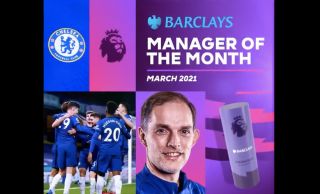 It hasn’t taken Thomas Tuchel long to be named as the Premier League’s ‘Manager of the Month’.

Since replacing Frank Lampard earlier this year, Tuchel has enjoyed an excellent start to his reign in the Blues’ dugout.

Tuchel and his Chelsea team are unbeaten in the German’s first 14 games in charge, including back-to-back wins over Atletico Madrid in the Champions League.

Domestically though, since Tuchel’s arrival, Chelsea have won six out of 10 games which now sees them fourth in the league table.

Following what has been a remarkable run of form, Tuchel has won his first Premier League ‘Manager of the Month’ award.

Bossing it on the touchline ?