Sergio Ramos has approached PSG in an attempt to give Real Madrid a boot up the backside in talks over an extension to his contract, according to Todo Fichajes.

Ramos’ contract with Los Blancos is due to expire at the end of the season, with Florentino Perez not yet being able to strike an agreement with the Spaniard over an extension to his deal.

MORE: Chelsea fans will be gutted to hear what Mino Raiola told Real Madrid and Barcelona in Erling Haaland meeting

Every day that ticks past towards June will be a day which increases the anxiety of the Real Madrid fanbase – and for good reason, too. Ramos is still one of the finest centre-backs in the world, and he’ll soon be available on a free.

As per Todo Fichajes, Paris Saint-Germain are one side who, as you’d probably have expected, are in the race to sign Ramos. 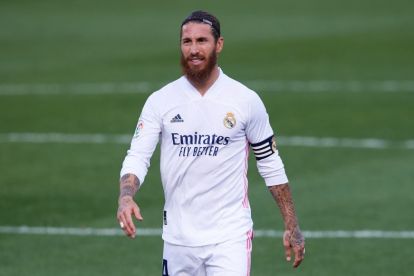 Sergio Ramos in action for Real Madrid this season.

The report notes that Ramos has actually initiated contact with the French champions, but only in hope of giving Real Madrid the necessary wake-up call to give him the contractual terms he desire.

Only time will tell if it pays off.