Marca have provided an update on the fitness of Eden Hazard, with Real Madrid set to face Liverpool on Tuesday night.

Hazard’s dream move to Real Madrid hasn’t been all it cracked up to be. The Chelsea great has struggled to stay fit during his time at the Santiago Bernabeu, meaning his contributions over the past two years have been severely limited.

MORE: Real Madrid’s record without Sergio Ramos is one almighty boost for Liverpool ahead of Champions League clash

The Belgian has only recently recovered from his latest injury, with Marca reporting that he is now taking part in full training with Zinedine Zidane’s squad ahead of the first-leg of their Champions League clash with Liverpool on Tuesday night.

Marca claim that there is a possibility that Hazard will be fit to be involved in the clash with Liverpool, but you have to think it unlikely that Zidane would opt to start a player who is so dearly lacking match sharpness. 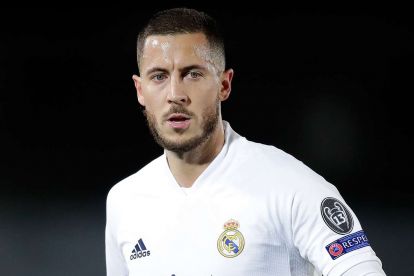 Nonetheless, with teams allowed to make five substitutions in the Champions League, there’s more than enough room for Hazard on the bench and plenty of opportunities for him to be introduced at some point over the 90 minutes.

The brilliant Belgian has scored some memorable goals against Liverpool, so there’s absolutely no doubt he’ll be itching to get out there and make a statement which could provide the spark for a resurgence at Real Madrid.