Crystal Palace boss Roy Hodgson has hit back at Michy Batshuayi after comments were made by the Chelsea loanee on international duty.

Batshuayi’s return to Palace on loan has been virtually pointless from the Belgian’s perspective. Roy Hodgson clearly doesn’t value what he has to offer.

The 27-year-old has a good goals-per-90 ratio in a Chelsea shirt, and also enjoyed a prolific loan spell at Borussia Dortmund a few years back.

However, at Palace, he’s a bit-part player, and speaking to the media while on international duty, he revealed his frustration.

? Michy Batshuayi: “I get a breath of renewed energy when I come into the national team, because it’s very hard for me at my club.

“I feel a lot of trust from the coach; trust that I do not get there.”

These comments were never going to sit well with Roy Hodgson, but the Palace boss has issued a pretty lengthy public response, which is unusual.

As quoted by Sky Sports, Hodgson clapped back to Batshuayi’s claims:

“Then you expect him to say the type of things Michy said. If after 45 years I didn’t expect that or come to terms with that, I would have been living in a different world.” 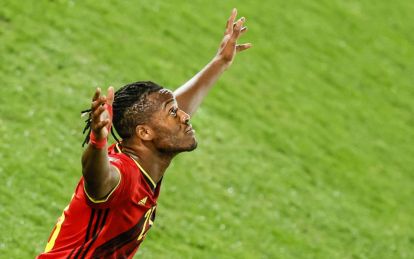 Batshuayi celebrates after netting for Belgium against Belarus.

“But I would advise people that when they do go away and say that to be a little bit careful. Because playing 60 minutes against Belarus and scoring one of eight goals is not quite the same as if he comes on against Everton and helps them to a 3-0 win by scoring a couple.”

“I would put that in a different league in terms of achievement. Without wishing to denigrate them in any way, the quality of a Belgian team against a Belarus team is not like two Premier League teams playing together.”

The relationship between the pair is probably at an all-time low after this, so it’s difficult to see the striker featuring much between now and the end of the season.

You can be fairly certain that they won’t be exchanging cards this Christmas, too.