Mundo Deportivo have provided an update on the future of Ousmane Dembele at Barcelona – and there’s Premier League clubs waiting in the wings if he is unable to agree a contract extension with the Catalan giants.

As reported by Transfermarkt, Dembele’s contract is due to expire in 2022. That leaves Barcelona with two options, should a contract agreement not be reached, either sell him this summer, or face the possibility of losing him for free next year.

MORE: Man United ace thought to be considering his future, summer exit could be on the cards

A club with Barcelona’s financial problems cannot afford to lose an asset like Dembele without receiving a penny in exchange, especially considering they paid £135.5M to sign him, as per the BBC.

Thankfully for Barca, there doesn’t appear to be any shortage of interest in signing Dembele, with Mundo Deportivo reporting that Manchester United, Liverpool, Juventus and Paris Saint-Germain are all keeping tabs on the situation. 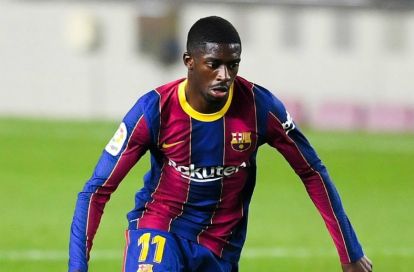 Ousmane Dembele is attracting interest from the Premier League.

There’s no mention in the report by Mundo Deportivo just how much Barcelona would demand for Dembele, but his contract situation leaves them with little bargaining power.

If Manchester United, Liverpool or any other club is genuinely interested in signing the 23-year-old, with every day that passes without him penning an extension, their optimism will be growing.