Thomas Tuchel was forced to send Antonio Rudiger in early from Chelsea training after he was involved in a bust-up with Kepa Arrizabalaga, according to the Telegraph.

Rudiger did not play a minute for Chelsea in their 5-2 defeat to West Brom on Saturday afternoon, so out of all the players in Tuchel’s squad, you could expect him to be one of the less emotional ones at current.

However, as per the Telegraph, Rudiger flew into a challenge with Kepa Arrizabalaga during a small-sided game at the end of Chelsea training, with Kepa clearly not taking kindly to it.

The Telegraph report that Rudiger and Kepa ended up pushing each other while exchanging words, before Tuchel sent Rudiger in early from training to cool off. The centre-back is thought to have later apologised. 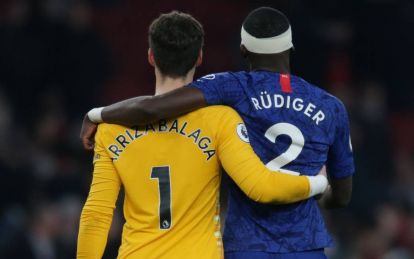 Kepa and Rudiger are thought to have had a bust-up at Cobham.

There’s no doubting that these incidents happen all the time, but Tuchel will be disappointed to have had it happen just a day after losing 5-2 on his home turf to one of the worst teams in the Premier League, all due respect to the Baggies, who were brilliant yesterday.

Tuchel could also have a problem, looking further down the line, with sensitive news of this nature being leaked out of the Chelsea camp. In this case, the information doesn’t undermine him, rather it shows his strength, but that won’t always be the case.