Operation re-sign Neymar could prove to be unaffordable for Barcelona, with Don Balon reporting that they could need to sell up to three of their biggest names to get the deal done.

Neymar, who was a treble-winner during his time at the Nou Camp, departed for PSG back in 2017 in a world-record transfer.

MORE: Mino Raiola goes to war with the media again over speculation on his commission for selling Erling Haaland to Man City or anyone else

The Brazilian has been superb, when fit, at the Parc des Princes, but speculation linking him with a return to Barcelona has refused to go away.

As Don Balon report, there is once again talk of the 29-year-old re-joining the Catalan giants, but there appears to be major doubt over the plausibility of the deal materialising.

Don Balon believe that Barca would need to sell all of Antoine Griezmann, Ousmane Dembele and Philippe Coutinho to get the deal done. 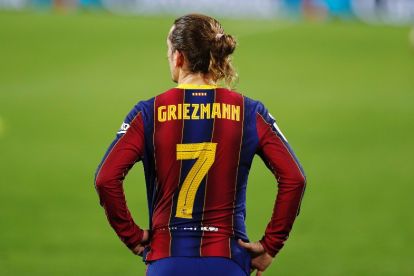 Antoine Griezmann is being linked with the Barcelona exit door.

Two of those are currently key players under Ronald Koeman’s stewardship, so you wonder if the Dutchman would deem it worth it.

Neymar is a phenomenal player, but reducing Koeman’s selection options in attack to such a degree to get him through the door would be unwise.

Barcelona compete on all fronts, year after year. The seasons are long – with depth an absolute must have.