With less than 10 games to go in the La Liga season, Barcelona have the destiny of the title in their own hands.

There’s a long way to go quite clearly, but having picked up 37 of the last 39 points available, the Catalans are far and away the form team in the Spanish top-flight.

If they’re able to beat Real Valladolid at the Camp Nou on Monday night, it would bring them to within a point of leaders Atletico Madrid.

At the end of January, the Rojiblancos were 10 points ahead of Barca and with a game in hand, but since then, Diego Simeone’s side have fallen off the edge of a cliff. 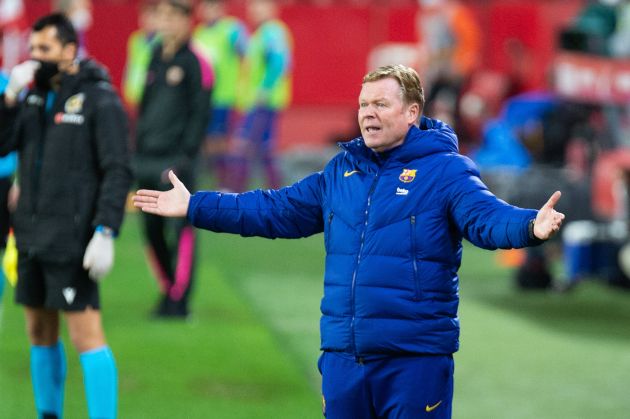 When we think of comebacks, Barca’s 6-1 demolition of Paris Saint-Germain inevitably springs to mind. Manchester City’s two injury time goals in 2012 to win the Premier League is another, and there will be more examples.

However, if Ronald Koeman steers the Catalans to the title, that will surely trump any comeback that has gone before.

Barca were a ship without a rudder last summer. Lionel Messi wanted to leave, Quique Setien had been a disaster as the manager, and Bayern Munich had humiliated them 8-2 in the Champions League.

Not to mention that after 10 games of the domestic competition, the club had endured their worst start for 33 years and were closer to the relegation places than the top of the table.

The odds were so stacked against them that any notion of silverware wasn’t even in anyone’s thinking.

Now, the title is theirs to lose.

After Valladolid comes perhaps the most important El Clasico in years, and if Koeman’s team can stay unbeaten until week 35, a win in that week over Atleti will surely cement this incredible phoenix from the flames story.