Gary Neville has gone into detail during tonight’s Sky Sports Monday Night Football (MNF) show as to why Liverpool right-back Trent Alexander-Arnold may not go to the European Championships this summer.

Alexander-Arnold is considered one of England’s best talents, and for good reason. The 22-year-old possesses creative ingenuity which sets him apart from many of his defensive counterparts.

However, for all of his offensive exploits, Alexander-Arnold is one of England’s weaker right-backs on the back foot. At such a tender age, with much still to be learn, you can hardly criticise him for that.

Nonetheless, he was omitted from the England squad for the latest round of international fixtures, and Gary Neville doesn’t believe he will be able to work his way back into the setup before this summer’s major tournament. 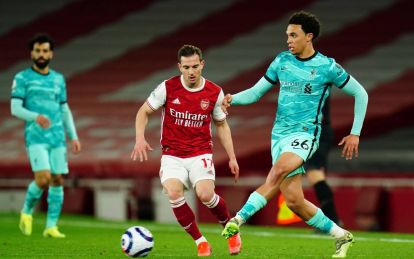 Alexander-Arnold starred for Liverpool during their 3-0 win over Arsenal.

England will be competing in the European Championships in just a few months time, and speaking on Sky Sports’ MNF show, Neville revealed his belief that Alexander-Arnold won’t be a part of it.

?”If you have picked Trippier over Trent that is embarrassing.” ?

?”He is in my squad thank you very much.” ?@GNev2 & @Carra23 get heated about Gareth Southgate leaving out Trent Alexander Arnold of the Euro England squad pic.twitter.com/AXCp1AjFxF