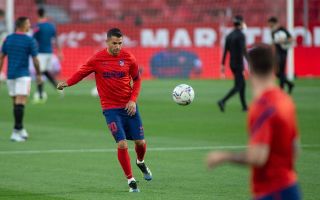 The Hammers first looked into signing Vitolo before they eventually opted for a January loan transfer deal for Manchester United’s Jesse Lingard.

It remains to be seen if Lingard will join West Ham permanently, so it seems Atletico have been in touch with the east Londoners about the option of signing Vitolo again.

The Spain international seems like he could do well in David Moyes’ side, and looks a realistic target due to not playing regularly at Atletico.

West Ham fans would surely rather keep Lingard, however, but the down-side of the England international’s fine form is that it might persuade Man Utd to keep him, or else raise his asking price.

Vitolo could definitely be a decent Plan B option for West Ham.