Jesse Lingard was phenomenal for West Ham against Wolves on Monday night, with two of his former Manchester United teammates being mightily impressed.

Lingard may not have been in contention for starting opportunities under Ole Gunnar Solskjaer, but he remained a popular player within the squad for the duration of his time away from the field.

MORE: West Ham attackers “like Ronaldo and Messi in their prime” with Wolves fans left drooling by visitors’ performances

Testament to that is his Instagram comments in wake of every man of the match performance for West Ham, which since joining the club on loan in January, has been on a virtually weekly basis.

Lingard’s Instagram comments were once again flooded with blue ticks praising his stunning performance after the England international scored a stunning solo goal and had a hand in two more for West Ham away at Wolves.

Notably, Bruno Fernandes and Marcus Rashford showed their love for their former teammate, posting comments commending what was another vintage display from the 28-year-old in a West Ham shirt. 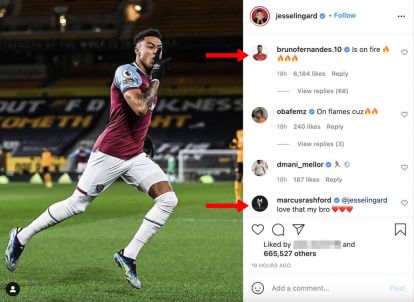